Skip to content
Jane Clancy As The Hot Walker Turns, Ministry of Humor, More Photos Than You Care to See December 7, 2011February 18, 2013 3 Minutes

I printed out this visual aide and took it with me to the barn.

Left to my care-free, easy-going, eyeball-it devices, Hudson could easily have been clipped into a Standard Poodle finish.

I Googled clipping to brush up on body clipping, after 20 years off.  A horse-sized stick of white chalk to mark out my ‘lines’? Seriously? Who has giant white chalk?

Genius strikes. I hit up the tool shed, and score a roll of masking tape. Press on to apply, then peel off in the direction of the hair. Totally painless. Chalk-shmalk.  It won’t smear!

Hudson is One With The Clippers.  He Zens out as soon as he hears the whir:  tension drains out of his muscles, he yawns, his ears get loose, his eye glazes, his lids begin to drop.

While I uncoil cord, pour blade wash into a pan, oil blades and turn clippers on and off, I  see  Zzzzz’s beginning to form in the air above his ears. He’s supremely content.

Seeing him happy and soft makes the tension drain out of my muscles. I riiiiip out the first length of masking tape, utterly relaxed. H paid no attention to the ripping.

Hudson is now forty feet tall. It’s ON him?! He snorts.

“I like the tape?”, I say, conversationally, as if he has a choice, “It makes it easy…Cut Line Here. See?” I poke him,  to point out tape is a sensible alternative. (No, I never  learn.)

My pressing the tape on his body creeped him out, in that crime-scene, she’s marking-where-the-bodies-fell sort of way. The moment I laid masking tape along his belly, he stopped sleeping and began scowling: 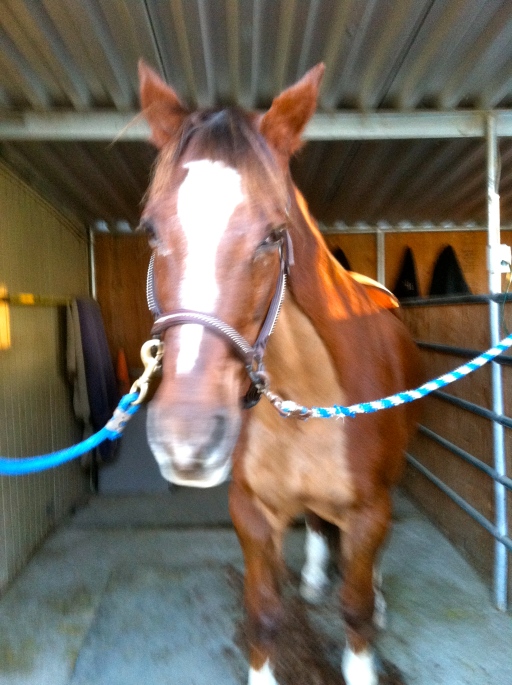 Hudson fully expected to wake up with something manly on  his butt, like a star, or a steer head, and a full body clip. Instead, it looks like I knocked him out, rolled him over, and mowed his stomach.

It looks like a Brazilian wax job done by a ‘technician’ that advertised their prices in crayon on a cardboard sign.

Still, I was ridiculously pleased I got the line this clean.

I took him out of the cross ties, and he, uh, stretched out his neck. I immediately squished his head back down.  His throat latch looked like it was cut by gleeful kindergartners with  stubby little-kid scissors.

His belly was surprisingly good.  But then, we have to turn upside down to make any comments about the belly clipping, which gives most people a headache: far easier to say “great job on the belly” without looking.

When I finished, I warm toweled all the loose hairs off, brushed thoroughly, blanketed, and put him away, automatically checking the gate locks.

You see, he and Dinero had a jailbreak. It was my fault: I either didn’t clip the chain right, or (gulp) I forgot to chain the gate shut.  I was completely paranoid about opening the gates for weeks.

They got off the ranch.

Luckily, both follow their stomachs, and ran UP the driveway to the racing barn, and were happily chowing down in their hay shed. Thank God Alice woke up thinking, “Hooves…?  I shouldn’t be hearing hooves outside my window at 1 am.” She woke Bella and they hunted down and caught the boys.

There is something terribly wrong about being the people needing to catch the loose horses, on a work night, near a busy road, when you aren’t the one who left the gate open.  (They were both extremely generous with me about my mind loss.)

This is why, after clipping, I check all the gates twice, even those I haven’t used. I slip out through the bars so I don’t have to unlock anything.

Did you know the horses are out? BM found and is putting them back. It’s ok, they’re in barn area.

I know Hudson is the culprit. A few years back, Bella woke up to the sound of the chain banging on the gate: she ran outside pulling muck boots on over her pj’s.  Hudson had managed to work the chain up out of the slot and back out the little hole TWICE (because it’s locked twice) and let himself out.

It seems obvious to me that Hudson is mortified by his trace clip. He’s running away from home, and taking Dinero with him.

Maybe I can mollify him with a press-apply tattoo? Before he packs all his belongings in a haynet and slings it over his shoulder? How to keep him from running away?

(I bought a horse-proof U clip for the gate. So far, so good.)

21 thoughts on “In Which Jane Does a Little Mowing, and Hudson Runs Away From Home”